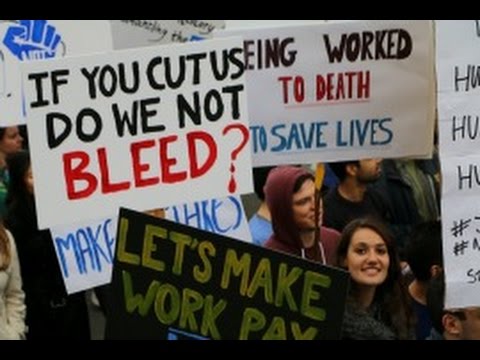 I have not done any in-depth reading about the decision of the Health Secretary to impose a new working contract on Doctors so this is a comment from the heart rather than reading through a subject and making a sensible comment, (not that I am well known for sensible comments).

I think this is a very poor decision which will lead to worsening conditions in our hospitals and in GP practices and one that will have to be reversed in future, or at least changed back to something similar as to what happens today. Whilst the government appear to think that it will affect only Doctors, it will have a much bigger impact on patients and these are the patients who elect politicians in the long run, not Doctors. I have always had a great admiration for the National Health Service but there is no doubt that it has worsened over the past 10 years or so.  Appointment times are longer, waiting times in A&E are longer and now we have waiting list to get appointments. This is nothing but a fudge to try to keep the length of appointment waiting times down.

Another problem that the government will have is a brain drain of trained Doctors. I think a lot of these will emigrate to Scotland, Northern Ireland and Wales. Indeed I have just seen a comments from the Welsh Health Secretary that this contract will not be imposed in Wales and that Doctors will be welcome in Wales. I also think a lot more will emigrate a lot further with Australia and New Zealand being high on the list. I know a young lad who is in his first years of medical school and this is what he was intending to do when I last spoke to him if things got worse in the UK.

The government will probably squeal that this should not happen and that they pay a lot to train these Doctors and that the Doctors should have to pay for their training before they leave to country but why should they when the government is moving the goal posts.

In any case, the government lets exactly the same thing happen in reverse when you look at nurses. The NHS trusts have been recruiting overseas nurses for years with the cost of their training being dumped on the country that paid for the training. I do not recall them saying how bad that was so they cannot say this about paying for training Doctors who then leave the country. There wouldn’t be a shortage of nurses of course if we trained our own nurses. Whilst I know that we do train a lot of our own nurses, supply doesn’t keep up with demand and people are being turned away from nursing training as there aren’t the places available, yet there is the demand for these nurses.

Someone needs to pull their finger our and sort it. It is common sense, but that seems to be sadly lacking in a lot of people these days, especially the Conservatives. I think this is another example of the Westminster Bubble warping again.